As the world continues to change rapidly, software applications must be constantly updated. This forces software developers to release new features quickly. It is, however, a challenge to keep bugs and other software issues to a minimum. I have always found that feature flagging saves the day in these situations.

But what exactly are Feature Flags?​

Feature flags are a piece of code that conditionally hides and displays functionality. By flagging features, you can control which features users can see and interact with. You can also target feature releases to specific user segments based on demographics, which simplifies the process of canary releases and feature rollouts.

About the sample application​

This sample application is a fictional dating web application called Acme Dating. It has three pages: Home, Top Matches, and Not Available. My aim here is to "feature flag" the Top Matches page. This means the page would be visible to the user if the feature flag is turned on. Here's an image of what the app looks like:

You can access the code repository for this sample app here.

The content for each file listed above can be found in the pages directory of the sample app.

In case you haven't noticed, I've deliberately skipped creating the most crucial file necessary to run the application. I'll get to it soon. 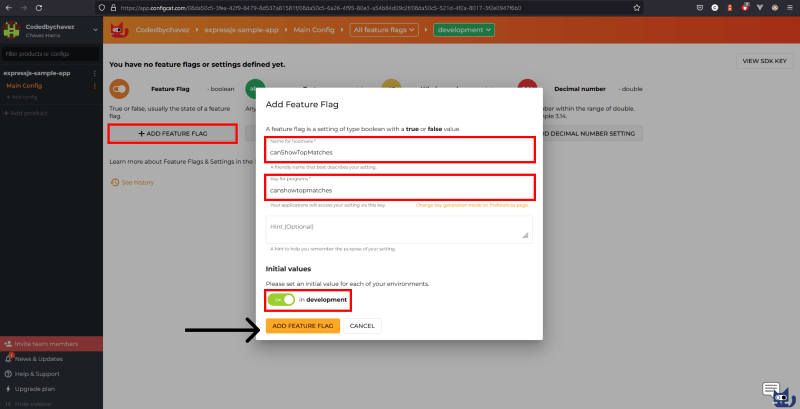 Now that the feature flag is created and switched on, let's add it to our app.

NOTE: Using the ConfigCat client as a singleton object in production is strongly recommended.

In the root folder create a server.js file with the following content. I've added comments in the code snippets below to explain what some of the logic does.

Let's see if it works​

When the feature flag is switched on, the Top Matches page would appear as shown below:

You can find the completed code for the sample app here.

There are many more code samples for various languages, frameworks, and topics in the ConfigCat labs organization on GitHub.

There are a number of benefits to feature flagging that I haven't even scratched the surface of. My favorite one is the ability to target specific user segments. Processes like canary deployments thrive and development workflows with steady feature rollouts are more effective because of this technology. With ConfigCat's 10 minutes trainable interface, implementing feature flags will be a breeze!

There are also tons of other frameworks and languages supported! Check out the full list of supported SDKs here.