ConfigCat's CLI has the ability to scan your source code for feature flag and setting usages and upload the found code references to ConfigCat.

This feature makes the elimination of the technical debt easier, as it can show which repositories reference your feature flags and settings in one centralized place on your Dashboard.

You can integrate the CLI into your CI/CD pipeline or use it with other execution mechanisms like scheduled jobs or VCS push triggered workflows.

The following example shows a simple scan execution that prints the scan result to the console. The scan command searches for every feature flag and setting key defined within a selected Config.

If you want to see this in action on your project, run the following command in its root folder:

As part of the scanning operation, the CLI gathers each deleted feature flag and setting from the last 180 days and looks for their usages in your source code. When it finds a reference for a deleted feature flag or setting, it prints out a warning that lists their keys.

There's an option to exclude feature flags or settings from the scanning operation by their keys.

In non-interactive environments, like in a CI/CD pipeline, you have to pass the ID of your ConfigCat Config that you want to scan against. The scanner will use this ID to determine which feature flags & settings to search for in your source code.

To get the ID of a Config, follow the steps below: 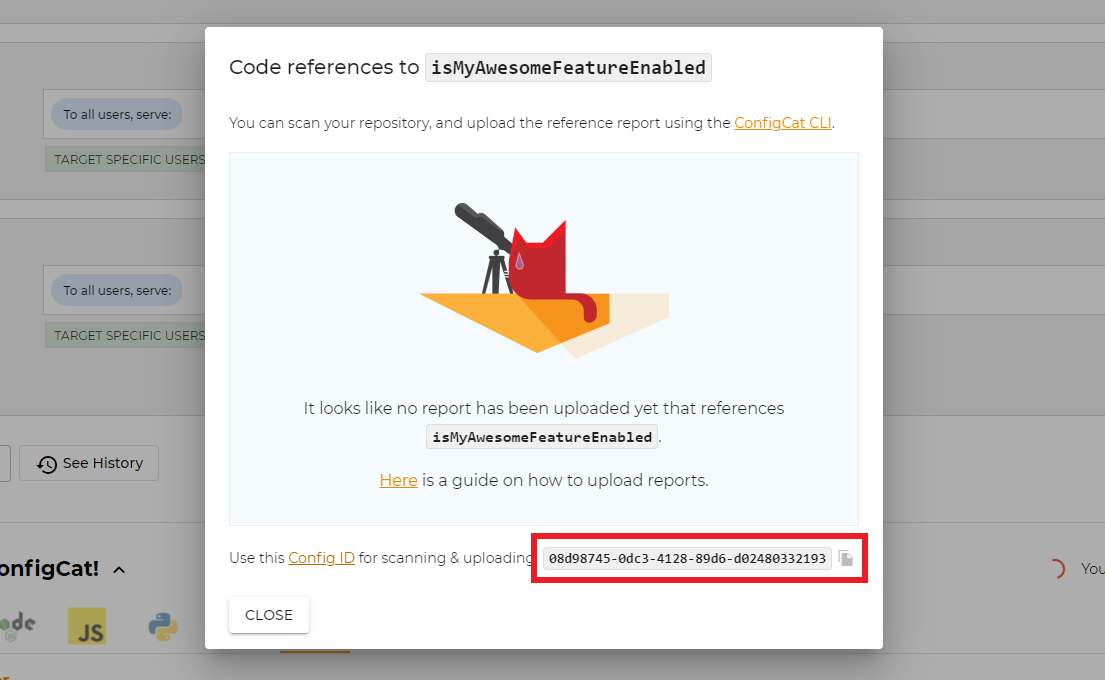 The scanner looks for feature flag and setting keys between quotation marks (' " `) in the first place.

The found keys' context is examined for aliases, like variables, constants, or enumerations used to store these keys. Aliases are treated as indirect references and are included in the searching process.

For example, the following C# constant's name (MyAwesomeFeature) will be recognized as an alias:

The scanner will treat this constant's usage as an indirect reference to the flag.

The alias recognition adapts to the characteristics of different languages.
For example, it can find aliases in Go constants/variable assignments:

And in Swift enums/variable assignments as well:

You can check here a bunch of other samples that we tested.

An alias must be at least 30% identical to the feature flag/setting key. The similarity check is case insensitive and ignores _ characters. This behavior prevents false recognitions in expressions like <input type="text" value="my_awesome_feature"> where value shouldn't be treated as alias.

In addition to aliases, the scanner also looks for different feature flag/setting key usage patterns. This helps to recognize functions and properties used to wrap direct ConfigCat SDK calls as indirect references. Aliases are also included in this search.

For example, the scanner will treat the IsMyAwesomeFeatureEnabled function of the following C# wrapper class as an indirect reference:

And will include it's usage in the scan report:

The scanner uses the following patterns to look for wrapper usages (case insensitive):

Given the key/alias my_awesome_feature, the scanner will find any of the following usage examples:

You have the option to upload scan reports for each branch of your repository to ConfigCat. Each scan report is associated to one of these branches.

The following screenshot shows how an uploaded report looks like. 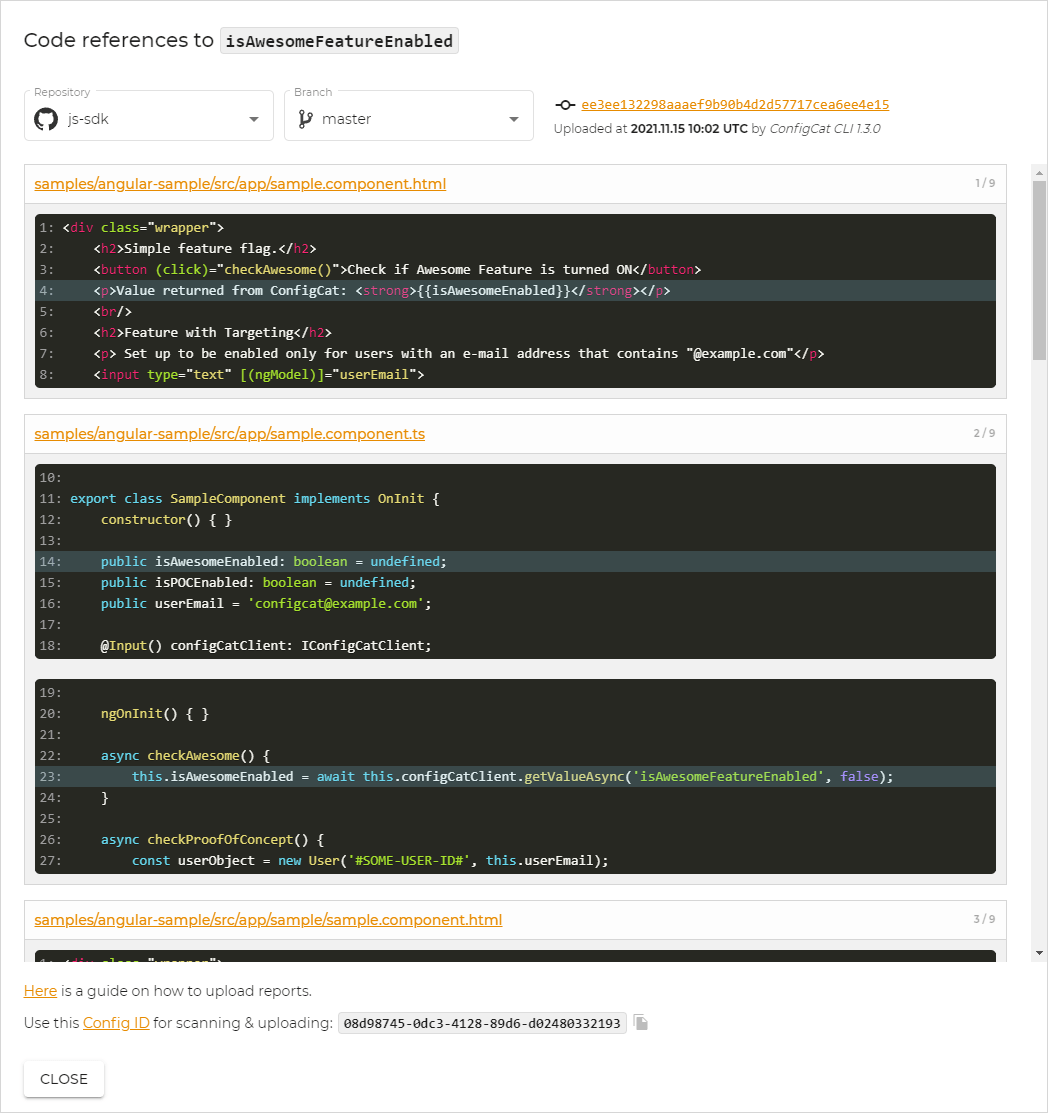 The scan command automatically detects when it's being executed on a git repository. It collects additional information from Git like the current branch name, the actual commit hash, and each active remote branch. These extra details are used to enrich the uploaded report on the ConfigCat Dashboard with links to your actual source code.

If you are not using Git as VCS, you have to set at least the --branch parameter of the scan command.

When these template URLs are not set, the uploaded report will not contain VCS links.

When the scan is executed on a Git repository, the CLI attaches the currently active remote branches to the uploaded report. This information is used for cleaning up each stale report that belongs to a deleted branch.

We prepared the following integrations to simplify the usage of the scanner in your CI/CD workflow:

If your workflow doesn't have an integration, you can follow the instructions here to set scan executions directly with the ConfigCat CLI.

The scan command respects all include and exclude patterns listed inside .gitignore and .ignore files within the scanned directory. In addition, you can create an extra .ccignore file with patterns that the scanner must take into account.